Industry 4.0 is the technical jargon used to describe the concept of the Fourth Industrial Revolution. You might remember meeting The Industrial Revolution in your school history class. This referred to the sudden jump in human technological achievement that came with the discovery of steam power. It enabled a lot of previously labour-intensive manual work to be done by machines, so that steam-powered automation gradually replaced people in major manufacturing industries, such as textiles.

The next big advance in technology, or Industry 2.0, was the development of the internal combustion engine and the adoption of electricity as the primary means of manufacturing energy. Industry 3.0 represents the introduction of computing and electronics, leading to widespread industrial automation and the World Wide Web. We're now already in the era of Industry 4.0, where the hardware and the software are being merged to produce what's called cyber-physical systems (CPS), and Industry 5.0 is hovering on the horizon.

A large amount of human activity today is being governed by a combination of physical objects, like clocks, lights, doors and cars, with their applications and control systems connected to the internet. This combination of computing capabilities, hardware devices and digital communications is generally called the Internet of Things (IoT). In the industrial environment, this concept is applied to automated manufacturing, transport systems, energy management and many other sectors, and is called the Industrial Internet of Things (IIoT).

CPS involves a complex integration of computing power and digital networking with physical machine processes. An automated control system using CPS will have an embedded computer that incorporates artificial intelligence (AI) and machine learning (ML). This will be connected by a communications link to a network that can monitor and control the system's physical processes. Sensors and other recording devices produce large quantities of data (called big data), which goes into the control system for analysis.

Using this data analysis, the AI and ML create a feedback loop by which the physical processes can be modified in accordance with their computations. This process can also be called cognitive computing, and it enables considerable enhancements in predictive maintenance. Embedded CPS is now being used to control all kinds of industrial activities, including manufacturing processes, picking and packing, mining, construction and much more.

Industry 4.0 has seen the spread of many new technologies that enable a deeper and more intense level of automation. One of the first of these was additive layer manufacturing, more commonly known as 3D printing, which enables the fast and easy production of even complex machines and components. With a computer-aided design (CAD) model and increasingly versatile materials, it's now possible to manufacture, modify and produce components on site. This can be a great advantage to maintenance engineers when replacing faulty parts. These machines are continually expanding their capabilities and can now produce much larger items, and even some made of metals.

Another important technology that's contributed to the success of Industry 4.0 is RFID tagging. Radio frequency identification isn't a new technology, but the advances in data reading and storage capabilities have seen it superseding the bar code as a means of tracking people and products. Radio waves do not require any visual line of sight to read the tag codes, just an antenna to pick up the signal and coordinate it with the integrated data storage component of the unit. It’s already having a great impact on supply chain management, and can be used in several ways to enhance industrial safety. In addition to monitoring the whereabouts of all personnel, RFID tags can incorporate equipment certifications, to ensure that only certified operators are using hazardous machinery, or machines that require special skills.

One of the most important benefits of CPS is the ability to abstract data from existing physical objects and convert it back into a CAD model. Scanners and sensors can be used to create the design, and in combination with a 3D printer, engineers can reproduce pieces on the spot if necessary. Complex techniques of data analysis can be applied to the designs once they're uploaded into the control system, so that performance can be assessed for potential improvements.

Taking this one step further is the creation of a digital twin. CAD models can be combined in design programs with performance histories and Augmented and Visual Reality (AR/VR). This allows designers and planners to enter into an application virtually, and see how it works. Wearing an AR or VR headset permits an operator not only to see and move around inside the 3D design, but also to use their own hands to modify components and structures within the model.

A digital twin not only reproduces a product's design and characteristics, but is also supported by big data from the performance history. Sensors collect this data from the product in use over a long period of time, so the digital twin can simulate its entire life cycle. Its AI and ML capabilities make a digital twin capable of predicting product behaviour, and of working out improvements to its design and production so that its performance is optimised.

Digital twins are particularly valuable in sectors where large-scale items are produced, such as air and spacecraft, military equipment and ships. They are a highly cost-effective way to understand and improve the performance of their physical counterparts, when developing and producing actual prototypes is expensive and time-consuming. Digital twins can also factor in the potential impact of particular usage or environmental conditions, without ever having to leave the office. They allow for easy-access collaboration, anywhere in the world, where any or all members of a team can enter the simulation and make observations or amendments.

The capacities of Industry 4.0 are expanding all the time, with vast and increasing benefits to the industrial world. The introduction of 5G wireless communications will be the next step in our technological evolution, so Industry 5.0 is just around the corner.

Enclosures For The Food Industry 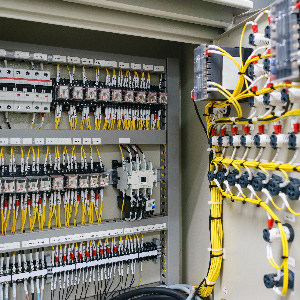 5 Things To Consider When Choosing Cable for Automation Applications