How To Size A Contactor

Nearly all control circuits have contactors, which are the main type of electrical power control device used in industries to make or break an electrical power circuit. Here, we'll be exploring various factors in choosing the right contactor for your application, including:

Sizing a contactor will depend to a large extent on the requirements of your application, and you'll have to take into account whether it's for a resistive or inductive load. You'll need to determine its full load amperage (FLA) and horsepower (HP) requirements, as well as the duty cycle (whether it's single direction or reversing).

What Is A Contactor?

Contactors are a particular type of electrical relay, distinguished by operating at much greater current ratings than standard relays. You'll find contactors in heating and lighting systems, and in power distribution panels forming the intersection between the power and control circuits. They're available in many types, and offer varying features and capacities. Possible contactor functions include disconnect switches, resistive loads, electronic switching or lighting circuits, and VFD bypass/isolation.

How Does A Contactor Work?

A basic contactor consists of an insulated copper coil input, which can either be AC or DC power operated, depending on the type of contactor. The coil can either use the same voltage as its load, or use a lower coil voltage – which works better with lower-voltage pilot devices and programmable controllers.

We've looked at contactors in greater detail in a previous blog post, which you can find here.

Contactors are rated by the International Electrotechnical Commission (IEC), according to various factors such as voltage and coil voltage, intended load current per contact, duty cycle and maximum fault-withstanding current. You can find general-purpose contactors for motor control that are designed for large motors which require heavy starting duty. These are often the AC-3 and AC-4 rated squirrel cage motors commonly used in industries.

Definite purpose contactors are those which are rated according to the intended life span and duty cycle of the application. You'll find these in applications such as motor starting for air conditioning compressors, and other machinery such as refrigerators. Definite purpose contactors are usually designed for controlling small motors, with low cycle rates and resistive heating loads.

The formula used to work this out is generally referred to as P=IV (or sometimes P=VA). In this formula, P stands for the amount of energy consumed per unit of time, which you'll usually see expressed in watts. For example, a device rated 1W will be consuming energy at the rate of 1 joule per second, which is equivalent to one ampere at a line voltage pressure of one volt. V stands for voltage in the formula, while I (or A) represents the electrical current in amperes.

P remains constant in any calculations, since it's based on the power requirements of your application, including its HP. As with any algebraic equation, if you change one term the others will change accordingly. Therefore, if the voltage is reduced, you must increase the current, and vice versa. Motors and other equipment used in industry generally have design specifications and a faceplate, which state its FLA and input voltage.

Here is a useful diagram for wiring your contactors. 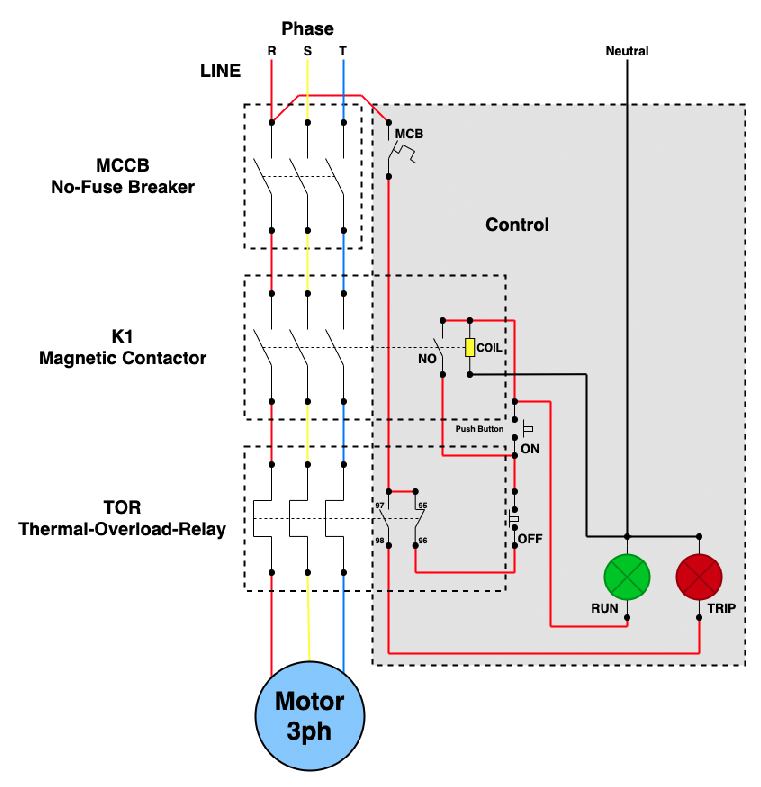 Many people think that contactors and relays are the same, but this is not entirely true. A contactor is a type of relay, which is designed to connect directly to applications demanding high current. As a general rule, relays typically carry loads up to 10A, whereas contactors are designed for loads over 10A.

Almost all contactors operate with NO (Normally Open or "Form A") contacts, while relays can be both NO and/or NC (Normally Closed or "Form B") according to function. This means that a relay could still form a connection even when not energised, while a contactor can't. To confuse matters, contactors sometimes have auxiliary contacts for specific additional functions, and these can be either NO or NC. These auxiliaries are used only to perform control functions related to the activity of the contactor.

Because they carry higher loads and generally draw more power, contactors are designed with a number of integral safety features, such as overloads, arc suppression and spring-loaded contacts. Spring-loaded contacts minimise the chance of contacts welding together, and ensure that all circuits are broken simultaneously when the application is de-energised. Arc suppression helps to enhance contactor safety by extending an arc's path past its ability to travel. Overloads cut in at a certain point to interrupt the circuit and protect downstream equipment from damage.

You'll more often use contactors for three-phase applications and relays for single phase. Contactors are usually rated for applications up to 1000V, while relays are for those rated only to 250V. A relay also has a common contact in a single circuit that connects to a neutral position, while a contactor joins two poles together, with no common circuit between them.

Contactors cover a vast range of sizes and capacities. You can find contactors with a breaking current of a few amps that you can hold in one hand, or those carrying thousands of amps that could be a cubic metre or more in size. Options range from 24V DC devices to those using many kV.

In practice, it's the function of your contactor that will determine its size. You might want it to control resistive loads like lighting or heating circuits, or perform electronic switching or VFD bypass/isolation. Industries commonly use contactors for inductive loads like electric motors or compressors. The built-in safety features make them the best choice. NPN Vs. PNP: What's The Difference? 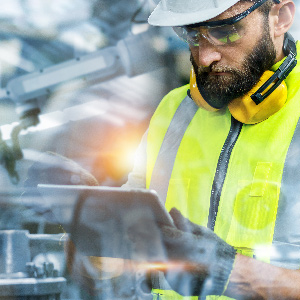 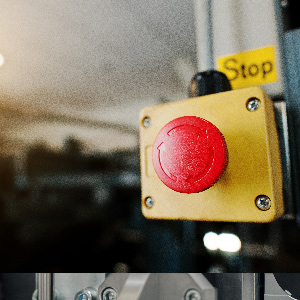 How To Choose Safety Components For Machines